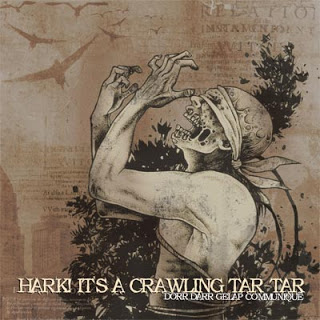 first of all, Dorr Darr Gelap Communique is one of my current favorite albums since about five months ago, so this may be quite biased and fap-like.
Hark! It's A Crawling Tar-Tar are a crusty hardcore punk band from Indonesia who incorporate many metal elements into their music as well as the staples of group choruses and obscure samples. These are few and far between in the album, as once you get beyond the intro, the band are very focused on bashing your skull in with well-tuned, precise instrumental and vocal fury.
Upon first listen to the album, one might think every song sounds the same. The band have a formula that works, but I wouldn't even say it all sounds the same; there are definitely distinguishable differences in every track, the band are just persistent in attitude and keeping the songs mid- to high-tempo. Standout tracks include "... And this is supposed to save our marriage, Kundang?", "Situ Bagendit: terpaskit di-persona-non-grata", "Behold! Tempe Mendoan Govern Your Intellect", "Kartu Garansi Setrika di Neraka", and "GramatikkallyOpressed", though every track seems to flow well into the next and has something to offer to the overall experience.
as stated before, the guitars are precise throughout the album, accurately chugging and riffing around, playing an important part in the formula of possibly intentional catchiness. which brings me to my next point: this album is catchy as fuck. I find myself humming parts of songs when listening or randomly throughout my day. there are many memorable parts, vocal patterns, and melodies that give this hardcore album a one-up to others of its era (you know, 2007).
in short, this album continues to influence me and I would very much recommend it to any sort of fan of extreme music. it may just be intense and different enough to offer something to everyone. 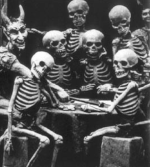 fappedy fap fap
_________________
Death to your false-idols, your Christ, your Newton, your Muhammad, your Satan. Cast the Buddha down and burn your science books, we'll dance around the fire like heathens on midsummer's eve and see what the world was like before god...